Airports Council International will hold its first event in Colombia on sustainable development. 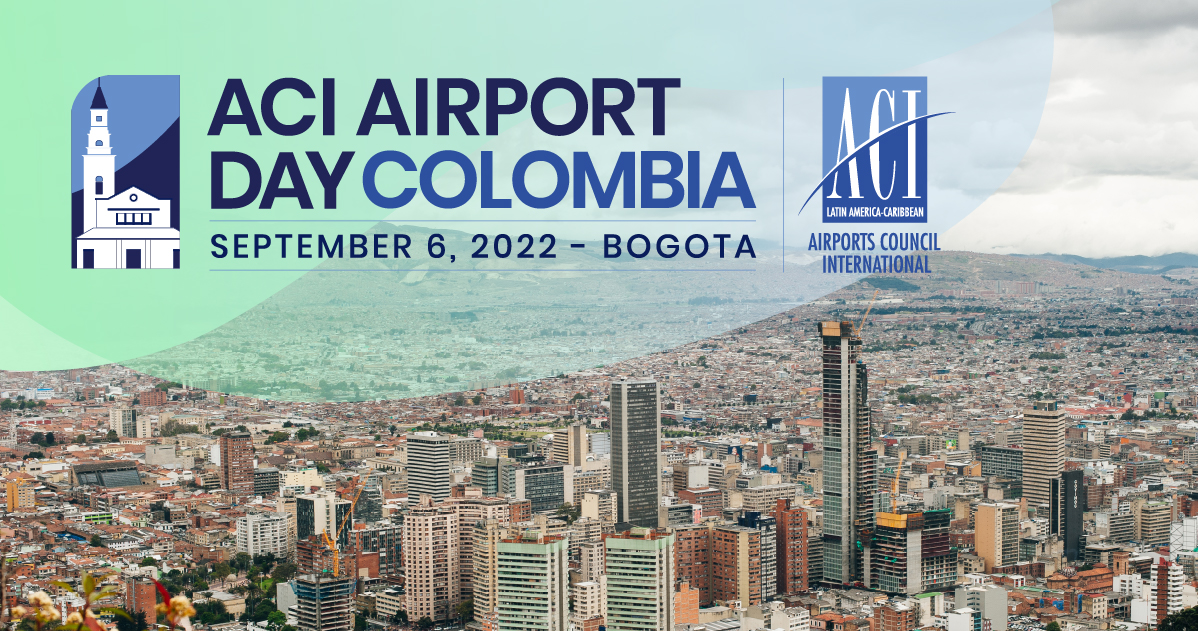 August 11, 2022 – Bogota will host the first ACI AIRPORT DAY COLOMBIA, a free event open to the public, organized by Airports Council International (ACI), which will bring together the country’s leading airport industry executives, national civil aviation authorities and experts on airport-related topics, as well as the environment, technology, business and urban mobility. On the agenda, a relevant current agenda: sustainable development and socio-environmental objectives of the sector. The event will take place on September 6, at the Courtyard Marriot Bogotá Airport Hotel.
At a time when global air transport is going through the most challenging period in history and the Colombian airport market is undergoing intense and relevant transformations, the ACI AIRPORT DAY COLOMBIA will bring together the industry to discuss the opportunities and challenges of the sector.
Invited speakers will participate in panels and presentations in which they will share successful and already award-winning experiences to reduce carbon emissions in various airport operations, such as the implementation of intelligence systems for real-time monitoring of emissions, reduction of aircraft noise, and management of water resources, solid waste and energy consumption. They will also present the latest data on initiatives to transition to the use of sustainable fuels and what will soon be a reality in the field of urban air mobility. The general director of ACI-LAC – ACI’s regional office in Latin America and the Caribbean – Rafael Echevarne, will speak about the main points of the airport industry’s agenda for the coming years in the region and Colombia.
On this occasion, ACI will present for the first time in a face-to-face event in Colombia the details of the commitment made with airports around the world to achieve the goal of reducing carbon emissions to zero by 2050. The long-term goal is an absolute reduction, i.e. without offsets, and relates to emissions that are under the direct control of airports, such as power supply for infrastructure and fuel for vehicles driving in terminal areas. To this end, airports around the world already have the technical support of ACI, through its Airport Carbon Accreditation (ACA) program, the only global training and consulting program for carbon management in the airport market, which evaluates and recognizes the efforts of airports and certifies them at six levels: ‘Mapping’, ‘Reduction’, ‘Optimization’, ‘Neutrality’, ‘Transformation’ and ‘Transition’. Currently, El Dorado Airport has the Airport Carbon Accreditation certification, they are among the airports certified at the ‘Reduction’ level.
“Colombia’s airport sector has already started the decarbonization process, with several award-winning initiatives. ACI is proud of this and presents itself in the country as an ally in this process, making itself available to the operators and authorities of the sector through our global experience and being the voice of the airports in the world, representative of the collective interests and the only interlocutor of the industry before the International Civil Aviation Organization (ICAO). In this way, ACI assumes its leadership role in promoting the sustainable development of the sector, maintaining aviation’s priority commitment to safety, and supporting airports to generate economic and social benefits to the countries and communities we serve,” said Rafael Echevarne, Director General of Airports Council International for Latin America and the Caribbean (ACI-LAC).
Follow news about ACI-LAC on Twitter at @ACI_LAC and on Linkedin as Airports Council International – Latin America and Caribbean – ACI LAC | #ACIAirportDayColombia.
About ACI
Airports Council International (ACI) is the sole trade representative of airports worldwide, with 1,950 airports in 185 countries. The Latin America and Caribbean office (ACI-LAC) represents 275 airports in 37 countries. In Colombia, ACI-LAC has the participation of 3 airport operators, OPAIN, concessionaire of El Dorado International Airport in Bogota; Grupo Aeroportuario del Caribe, concessionaire of Ernesto Cortissoz Airport in Barranquilla; and Sociedad Aeroportuaria de la Costa S.A. – SACSA, concessionaire of Rafael Nuñez Airport in Cartagena.