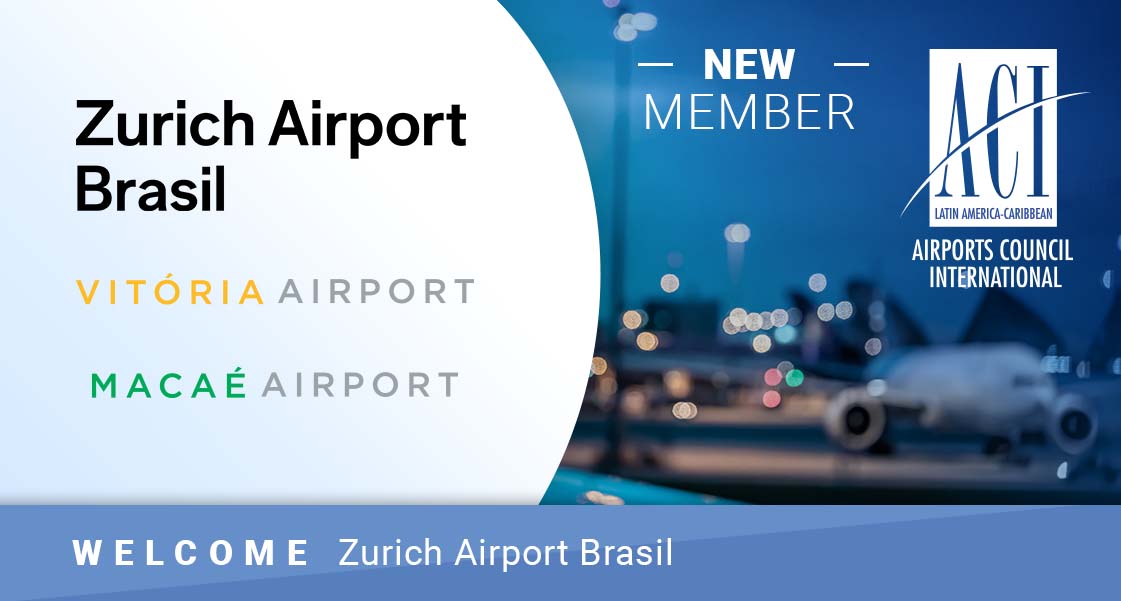 Zurich Airport Brasil is currently the concessionaire that manages the airports of Vitória and Macaé and also of Florianópolis, which was already a member of ACI-LAC. Zurich Airport Brasil has in its DNA a differentiated vision of airport infrastructure, based on the concept of being more than airports, positioning itself at the same time as a place for shopping, tourism, leisure and with a high potential for sustainable real estate development. Its management and projects have the particularity of maintaining as a premise the valorization of the culture of the places where the airports are located, offering the autochthonous of each of the cities.

“We welcome Vitoria and Macaé airports as new members of the Latin America and Caribbean region. The family of airports managed by Flughafen Zurich AG spans three continents and is characterized by operational professionalism, quality customer service and care for the environment, all amply demonstrated by its active participation in ACI initiatives. Latin America is where Zurich is most active internationally and we are convinced that these airports will be a reference for Brazil and the continent in general,” commented Dr. Rafael Echevarne, Director General of ACI-LAC.”

“We are honored to be part of ACI-LAC, an extremely relevant and active council in our sector. Together, we can build initiatives and actions towards the continuous improvement, sustainability and growth of our business in our region”, says Ricardo Gesse, CEO of Zurich Airport Brasil.

“It is important the arrival of new members to ACI-LAC that bring the perspective of the concepts developed by Zurich Airport Brasil within Florianópolis International Airport. We are confident that the airports of Vitória and Macaé can achieve positive results that will stand out in the Brazilian market”, highlighted Lilian Neves, Industry Relations Manager in Brazil and South America at ACI-LAC.

ACI World Director General Luis Felipe de Oliveira said: “It is great to see two new members join ACI from Latin America’s largest aviation market at a time when coming together as an industry has never been more important. Brazil represents more than 40% of the aviation sector in Latin America and is key to providing the sustainable social and economic development for the communities we serve. Aeroporto de Macaé and Aeroporto de Vitória are both important to connectivity within Brazil and with the world, delivering economic and social benefits to the communities when they need it most. I look forward to working with our new members as they join our global fraternity to continue to grow our representation in Brazil and strive for the long-term recovery of the aviation ecosystem. Sejam bem-vindos!”

ACI-LAC currently has more than 270 members in the region who continue to support the development and recovery of the airport industry.